Jane Ellis never suspected that accepting a friend’s invitation to an Astros game would bring her face to face with her hero of the past four decades.

“I jumped up when I recognized his name on the Jumbotron screen,” she said.  “He was down on the field throwing out the first pitch.”

The name meant nothing to her friends but after Leo Thorsness sat down in the VIP section, Jane announced to everyone around her that she’d worn his POW (prisoner of war) bracelet in 1971 and she intended to meet him.

Jane’s bubbly personality and bright smile haven’t changed much since she was sixteen and a cheerleader at Mt. Pleasant High School in northeast Texas.  At the time, the Vietnam war and all its controversy dragged on.  Print and broadcast media reported daily casualty numbers that rose higher and higher.  Equally disturbing was the number of servicemen held prisoner and tortured by the enemy.  To keep these prisoners of war in 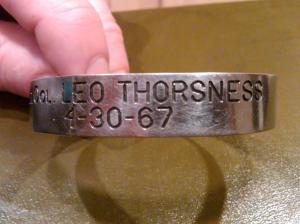 the public mind and to pressure the North Vietnamese government for humane treatment, a California-based group began selling metal bracelets for $2.50, to be worn until the men were released and returned home.  Each bracelet bore the name of a POW, his rank and the date he was lost.  Jane’s bracelet carried the inscription, “Lt. Col. Leo Thorsness, 4-30-67.”

For two years, the silver bracelet encircled her wrist.  She wore it to football games, homecoming dances and even prom.  But more importantly, she wore it to weekly youth group meetings where she and her friends prayed for the welfare and safe return of Lt. Col. Thorsness and other POWs.

Jane remembers seeing him the first time in 1973, shortly after the U.S. pulled out of the war and negotiated the prisoners’ release.   “My family watched the evening news to see the planes of the returning POWs that landed that day.  The announcer called out each name as they stepped off the plane.”

Suddenly, Jane heard the name engraved on her bracelet.  Awestruck, her heart skipped a beat as the man she’d carried in her thoughts and prayers walked across the television screen.

“He looked tired and gaunt, very thin in his one-piece jumpsuit.  But that smile on his face said he was so happy to be home.”

Her prayers for his safe return answered, Jane took off the bracelet and tucked it away.  But the image of Lt. Col. Thorsness remained firmly embedded in her mind and heart.  Now and then, she heard his name in the news but it was 2008 before she saw him again.

“While watching John McCain’s presidential campaign, I recognized Leo Thorsness sitting behind him on the platform.”

Motivated to research this man she called her hero, Jane learned that Lt. Col. Leo Thorsness, an Air Force pilot, had been shot down over North Vietnam in 1967.  Captured almost immediately, he endured repeated torture during his six years at the infamous “Hanoi Hilton.”  Though awarded the Congressional Medal of Honor while in captivity, it was kept secret for fear the information might be used against him by his captors.  He’d achieved the rank of Colonel before retiring and recently wrote a book entitled Surviving Hell: A POW’s Journey (Encounter Books 2008).

Now, seeing him live and in person at the ball park, Jane felt compelled to convey her respect.  She wanted him to know how deeply she appreciated his service and his sacrifice, how faithfully she’d worn his bracelet and prayed for him.

Unfortunately, her seat on the third level of Minute Maid Park kept her from getting anywhere near the VIP section.  Attendants in four different areas listened to her story but refused to grant access.  One recommended the Fan Accomodation desk on the first floor “but no one there was even old enough to know what a POW bracelet was.”  The best they could do was point to the most likely exit door, suggesting she might be able to catch him there after the game.

Disappointed, Jane returned to her seat.  Surely this wasn’t just a freak coincidence.  It felt like a “God moment,” a circumstance so unique that God must have orchestrated it.  Settling in to watch the game, she decided God could work out His moment without her help.

At the bottom of the sixth inning with the Astros up to bat, the promotions team approached Jane’s friend.  Because she was sitting in Row 315 Seat 5, a local business promised to award her friend $25,000 if the Astros hit a grand slam by the end of the inning.  While the promo team members waited for the grand slam or the third out, Jane told them about the man sitting down in the VIP section.  Impressed, one of them told her, “We can make this happen.”

Less than ten minutes after the inning’s end, the swipe of a security card began opening doors.  Each time her guides declared, “She’s with us,” Jane’s confidence grew; this was definitely a God-moment.  Her pulse raced as they descended into the exclusive Diamond Club then climbed the steps to the VIP section where an attendant stopped them.  This attendant knew what a POW bracelet was and hurried to ask if Col. Thorsness was willing to meet Jane.

Her hands moist with sweat, Jane could barely breathe as he stood and faced her, tall and every bit as handsome at 78 as he was the first time she saw him on television.  He reached out to her, saying, “You had my P.O.W. bracelet.”

“Yes, and you are my hero.”  Jane’s voice quivered.  She swallowed hard to keep her emotions in check.  “For two years, you went everywhere with me.  We went to school and football games–”

She told him about the dances and prom but when Jane mentioned the prayers at her weekly youth group meetings, his eyes filled with tears.

Acknowledging the war’s unpopularity, Col. Thorsness described how his guards came in every night and told him that America hated this war and hated him for fighting it.

“They said no one cared about us, no one wanted us to come home and that we’d die there, never seeing home again.”  He described how difficult it was to sleep, hearing those words in a prison cell, alone and battered.  And yet some nights, for reasons he never understood until now, he slept soundly, peacefully. 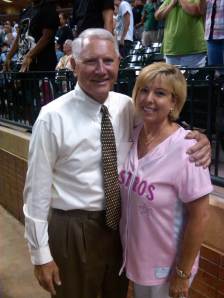 “I’d like to give you the bracelet,” Jane said.

Jane’s bracelet is still tucked away among her treasured mementos.  Two years of active teenage wear and tear left it cracked and brittle.  But Jane can’t help smiling whenever she remembers meeting Col. Leo Thorsness.